Winners of the 2013 FreshGrass Award

Cricket Tell the Weather is the creative project of Andrea Asprelli, award-winning songwriter and fiddler. She is backed by a collective of some of the finest players in New York’s roots music scene. Winners of the 2013 FreshGrass Award in North Adams, MA, Cricket features award-winning songs delivered with honest vocals and thoughtful arrangements with a modern edge.

“The child of an Italian-American and an Indonesian immigrant, Asprelli makes no claims to austere authenticity beyond the honesty of her own creative voice. But her contemporary spin on inherited forms is very much part of the American musical tradition.”

“[Cricket] uses thoughtful arranging and instrumental restraint, enabling them to sound at home in both traditional and modern styles… there’s enough talent in the songwriting, singing, and playing of [Cricket] to make this a young group well worth watching.” 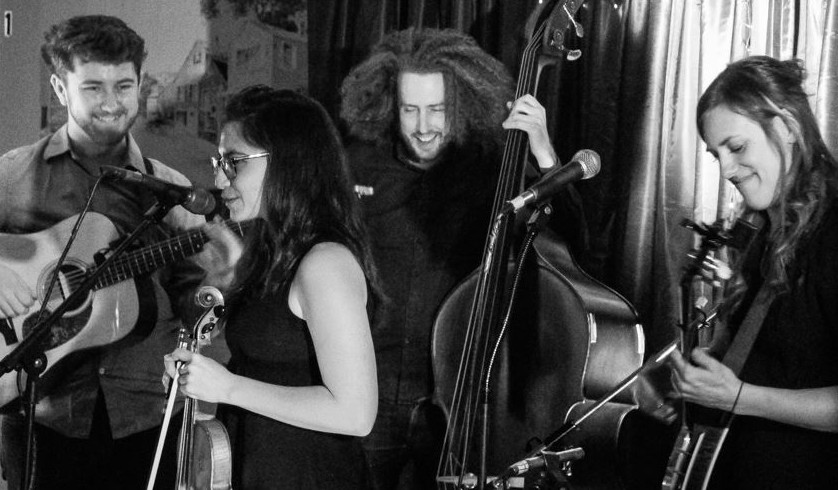 Growing up a classical musician in Colorado, Asprelli began playing bluegrass after she moved to the east coast, and was shaped by New England’s small but fiery local bluegrass communities. Moving from Northampton, MA to Syracuse, NY to New Haven, CT, she met many bluegrass, folk, and old-time musicians who inspired her along the way before forming Cricket Tell the Weather and setting up shop in Brooklyn, NY. Cricket performs mostly as a quartet, whose collective cast of NYC musicians includes Doug Goldstein and Hilary Hawke on banjo, Dave Speranza and Sam Weber on bass, and Mike Robinson, Jason Borisoff, and Jeff Picker on guitar.

The band’s song “Remington”, a co-write with Asprelli and musical collaborator Jason Borisoff, placed first in the Podunk Bluegrass Songwriting Competition. The band has twice been awarded the Neighborhood Arts & Heritage Grant from the City of Bridgeport, and is actively involved in providing bluegrass workshops to students of all ages under their “American Roots Revival” workshop series.

In 2014, Cricket released its independent eponymous debut album of original music, recorded at Signature Sounds studio in Pomfret Center, CT. Bringing with them heart, enthusiasm, humor, and an appreciation of tradition, Cricket’s voice is personal in a way that stretches against categories, and familiar in a way that honors those who have come before.